AVID TikTok users will have noticed something called the ‘Silhouette Challenge’ has gone viral on the app.

TikTok challenges vary in degrees of difficulty but luckily this one is fairly easy once you know how.

How do you do the Silhouette Challenge on TikTok?

The Silhouette Challenge is usually someone posing in front of a doorway and then suddenly turning into a silhouette when the lights go off.

This normally happens to the sound of “Put Your Head on My Shoulder” by Paul Anka.

Lots of people use Doja Cat’s song “Freak like Me” in which she sample’s Anka’s song from the 1950s.

There’s a few TikTok Silhouette Challenge explainer videos on the app but one of the best is from a user called @nurseswilling.

Their video explains how you can find a Snapchat filter called “vin rouge” that helps you create a colourful silhouette look without the need for special lighting.

In the video @nurseswilling explains that you open Snapchat, go to filters and then click Explore.

Then search for “vin rouge”.

Then prop your phone up ready to film, turn off the lights in your room but leave a door open to the hallway and make sure the hallway lights are on.

You should see on screen that this creates a silhouette look.

That means you can then perform your dance or whatever style of TikTok you were hoping to make in this silhouette form. 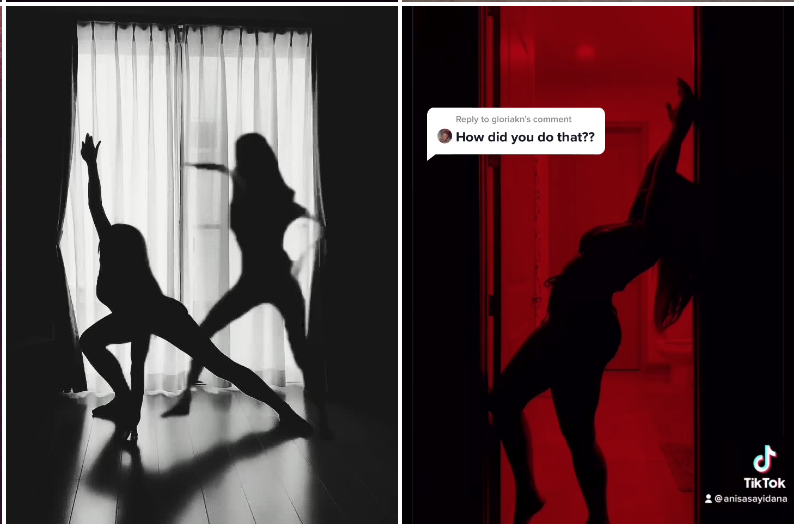 If you search for the Silhouette challenge on TikTok you’ll see lots of examplesCredit: TikTok

If you’re created a sudden contrast from normal pose to silhouette then you’ll need to film the clips separately as one will need the filter and one won’t.

Then just edit them together.

Of course, this does mean you’d be filming the video outside of the TikTok app.

Then you’ll need to upload it to TikTok once done.

You could always try the same steps but without a snapchat filter and put a coloured light in your hallway.

Or, you could follow Chloe Bailey’s example and ignore the open door and light hallway trick altogether.

The US singer has one of the most famous Silhouette Challenge videos and for it she just set very low mood lighting in her room to create the shadow effect.

TIKTOK: A BRIEF GUIDE TO THE WORLD’S MOST DOWNLOADED APP

It is owned by Beijing-based ByteDance, founded by the entrepreneur Zhang Yiming.

The $75 billion conglomerate acquired the Musical.ly app in 2017 and merged it with TikTok, bringing millions of new users.

It is the world’s most downloaded iPhone app – with nearly 800 million downloads across the globe, according to data from mobile research firm Sensor Tower.

In other news, scam emails claiming that the recipient has been selected to receive a coronavirus vaccine have been highlighted by concerned experts.

And, Apple has warned that the iPhone 12 could ‘interfere’ with pacemakers.

Are you a big TikTok fan? Let us know in the comments…