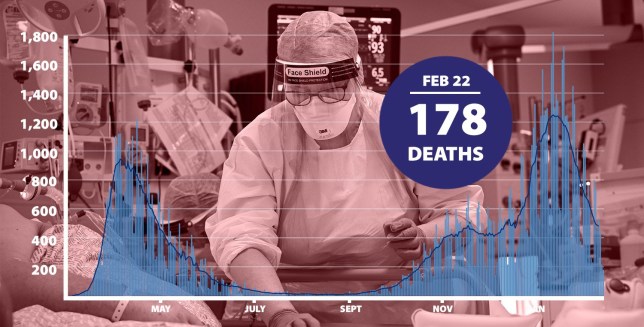 The latest Department of Health figures show 178 people have died with Covid-19 in the last 24 hours (Picture: Metro.co.uk)

Another 178 people have died with Covid-19 in the UK – the lowest daily tally since December.

This brings the overall toll since the start of the pandemic to 120,757. However, this number rises to 129,498 when taking into account all fatalities with Covid-19 listed on a death certificate.

Today’s toll is the lowest daily tally recorded since December 13 when 144 fatalities were reported.

A further 10,641 lab-confirmed positive test results were returned in the last 24 hours, according to the Department of Health.

This means a total of 4,126,150 people have tested positive since the start of the UK’s outbreak.

Today’s figures show there has been more than an 27% seven-day drop in the number of deaths, while the number of cases has decreased by almost 11% in the last week. 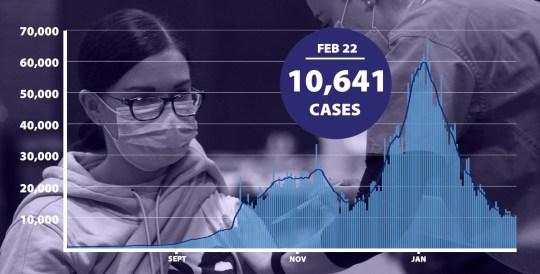 The figures come after the prime minister revealed his four-step road map to easing lockdown restrictions in England.

Under step one of the plan, all schools will reopen from March 8 and children will be tested twice a week for the virus.

From this date people will also be allowed to have socially distanced one-on-one meet ups with others outdoors in a public space – in a social aspect, such as for picnics and coffee, in addition to exercise.

Boris Johnson’s roadmap out of lockdown

Boris Johnson has laid out his plans to lift Covid-19 restrictions in England, following weeks of lockdown which began on January 4.

The Prime Minister confirmed that the route back to normality will depend upon four tests for easing restrictions and will take into account the success of the vaccine rollout.