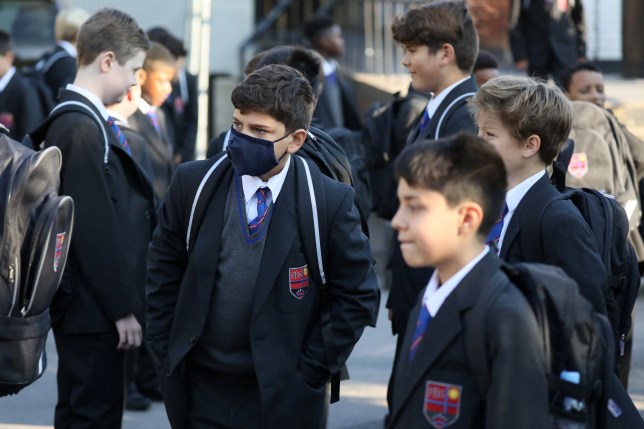 Pupils from The Fulham Boys School when they returned to school in September (Picture: Reuters)

Secondary school pupils will be made to wear face masks in the classroom when they return to school on March 8, reports say.

This means the older pupils will have to wear the coverings at their desks as well as in corridors, according to ITV News.

Head teachers could previously use their discretion to use masks in schools, but they are now set to be made compulsory.

The Prime Minister is due to tell MPs that all pupils in all years in England can go back to the classroom from March 8, with outdoor after-school sports and activities allowed to restart as well.

The plan for England’s pupils to return en masse comes despite warnings from unions that it could be ‘reckless’ not to stagger the resumption of face-to-face schooling.

Schools in Wales and Scotland began their phased return today.

The PM’s long-awaited ‘road map’ out of lockdown will see socialising in parks and public spaces with one other person permitted in a fortnight, when the rules are relaxed, to allow people to sit down for a drink or picnic.

A further easing of restrictions will take place on March 29 when the school Easter holidays begin – with larger groups allowed to gather in parks and gardens. 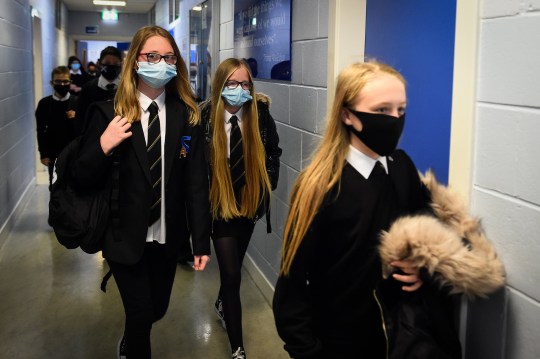 Pupils wear face masks as they walk in a corridor at Springburn Academy school in Glasgow (Picture: Andy Buchanan/Digital/AFP)

The moves form the first step in a four-part plan, which will not be completed until the summer – with around five weeks between stages expected to assess the impact on the spread of the virus and prepare businesses for the next move.

By the Easter holidays the ‘rule of six’ will return, along with new measures allowing two households totalling more than six people to meet – giving greater flexibility for families and friends.

Outdoor sports facilities such as tennis and basketball courts are also set to reopen, and organised adult and children’s sport, including grassroots football, can return from March 29.

The road map’s progress will depend on meeting four tests: the success of the vaccine rollout, evidence of vaccine efficacy, an assessment of new variants, and keeping infection rates below a level that could put unsustainable pressure on the NHS.

However, Number 10 insisted that the ‘stay at home’ message would remain in place despite the relaxation of some restrictions.

The changes will apply across England, rather than on a regional basis.