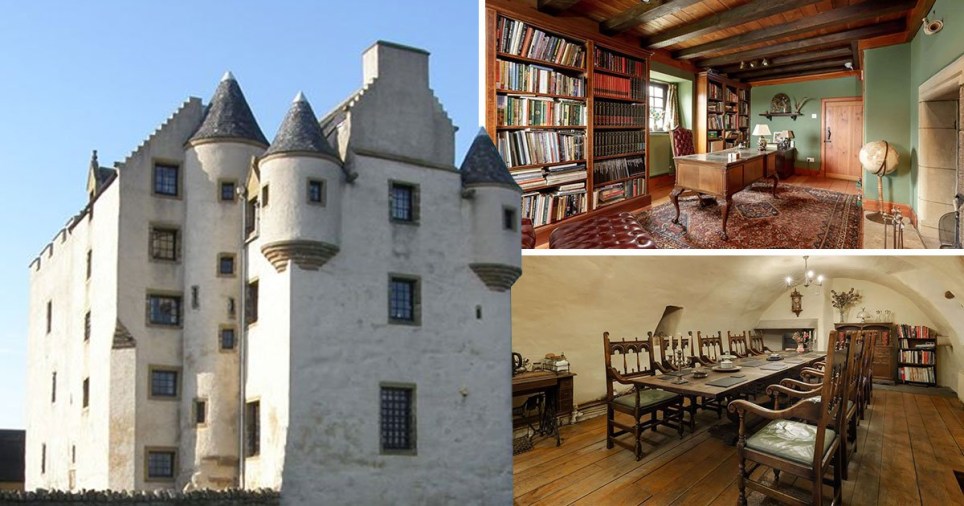 Saving up for a fancy London flat? Why not go for a castle instead? (Picture: Savills)

With deposits on the up and home ownership increasingly feeling like a distant dream, many first-time buyers are questioning whether saving up for a two-bed flat is really worth it.

How about a castle, instead?

Fa’side Castle, in Tranent, East Lothian, isn’t cheap by any means, but it offers a lot more bang for your buck than posh properties in London.

It’s up for sale at £1.7million, and offers six bedrooms along with its own watchtower and dungeons.

The castle once served as a home to Mary Queen of Scots, and is an example of early domestic Scottish architecture from the 14th century, so it’s got quite a history.

It still retains some of its original features from back in the day, including the Great Hall, complete with exposed ceiling corbels that were damaged in the last battle between Scotland and England in 1547. 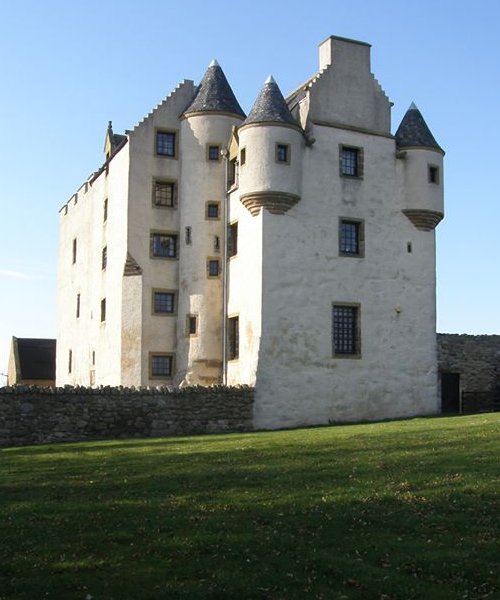 The six-bedroom castle sits in farmland in in Tranent, East Lothian (Picture: Savills)

There are also stunning stone stairwells, vaulted ceilings, a barrel-guarded bedroom, a library, and an original stone WC named The Laird’s Lug.

The interiors have all been brought up to date enough for the castle to be a brilliant family home, mind you.

When you walk in through the vaulted front door, you’ll find a hall, then the utility room, with a central heating boiler and a double sink ready for washing and drying machines. 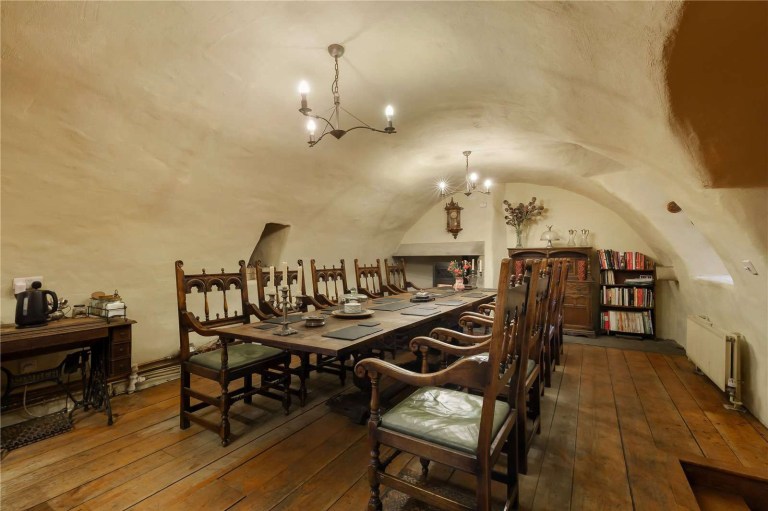 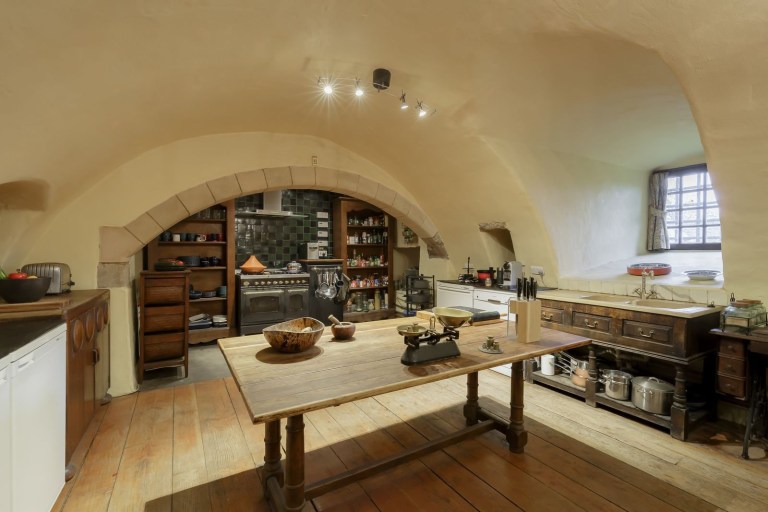 Then there’s an open plan kitchen and dining area, with a Britannia gas range cooker, a double sink, a biomass stove, and a larder.

A stone stairwell takes you up to the first floor, where there’s an elevator, and the drawing room, complete with a glorious fireplace.

The first floor also has a home office, with a spectacular painted ceiling among wooden beams. 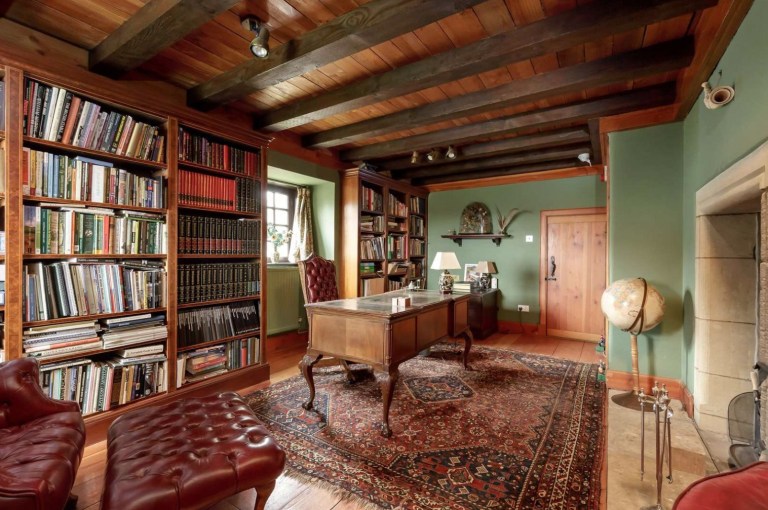 There’s a home office and a library (Picture: Savills)

At the top of the tower are the bedrooms. There are six in total, one of which has an en suite bathroom with a freestanding slipper bath. Dreamy.

Head up another spiral staircase and you’ll get a view of a glass walkway over the old dungeon, plus panoramic views over the Firth of Forth.

The staircase leads to the Great Hall we mentioned, complete with stone window seats built into the castle walls, the Laird’s Lug, and the library, sitting at the end of another staircase. 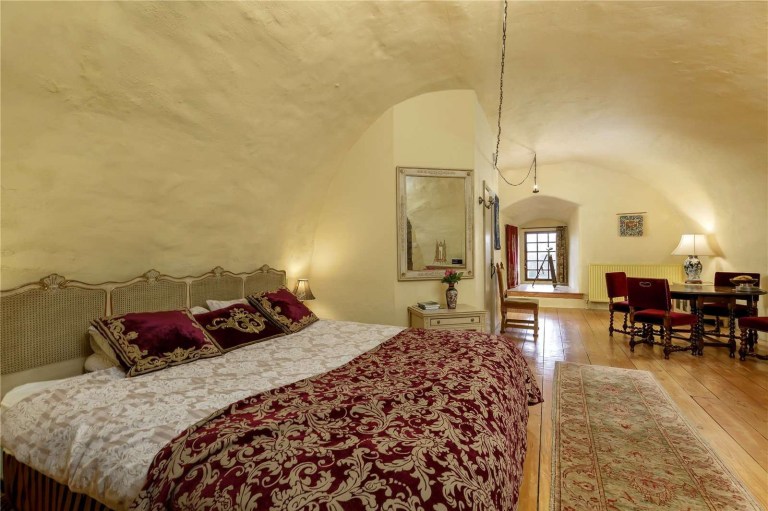 There are six bedrooms in the castle to choose from (Picture: Savills) 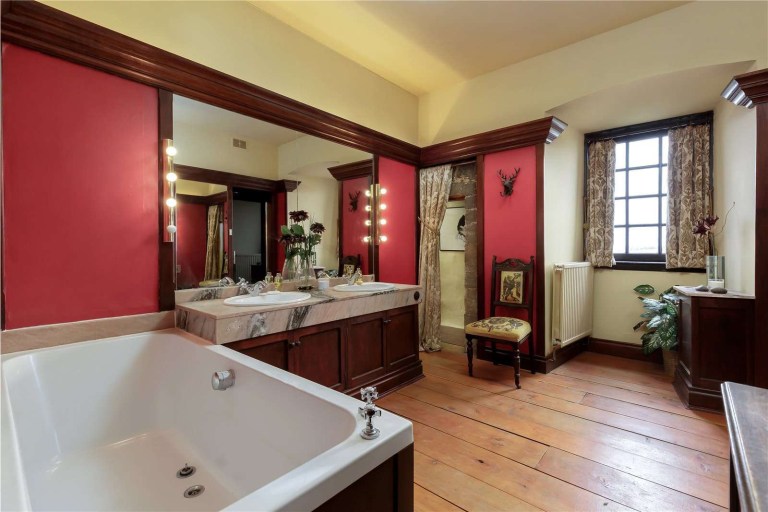 One bedroom has this snazzy en suite (Picture: Savills)

There’s a roof terrace, too, in case all that’s not enough, giving you a total of 7,411 sq ft of space across the grounds.

If you don’t fancy pretending to be a royal and living in the main castle, you can take your pick from two cottages also included in the grounds.

Each cottage was converted from a barn, and have two bedrooms and two bathrooms. One has a snooker room and workshop, too.

Outdoors there are also stables, a wind turbine, and seven acres of garden and paddocks to explore. 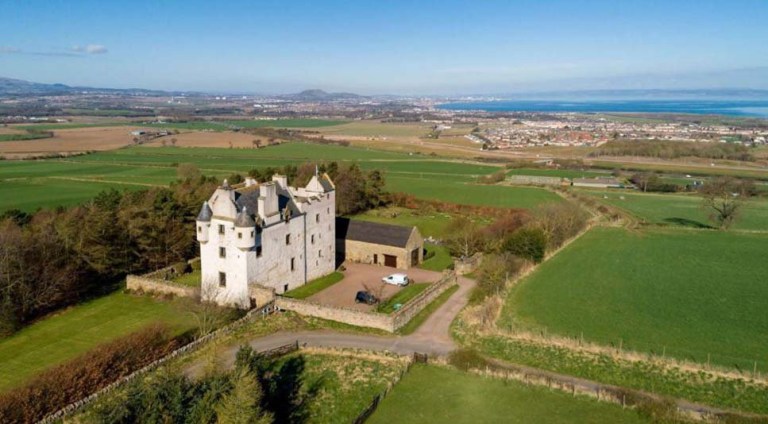 There are seven acres of garden and paddocks to explore (Picture: Pamela Stott)

Location-wise, the property is pretty great.

It sits in Scottish farmland, surrounded by incredible views of the countryside, but is just a 20-minute drive from Edinburgh.

Nearby are villages and sandy beaches, too.

Jamie Macnab, Savills Country House Director, said: ‘Fa’side Castle is one of the most considered examples of how to make an historic building dating from the Middle Ages work as a home fit for contemporary life.

‘The pitch perfect colour scheme and careful approach to modernisation have resulted in a truly outstanding property that is entirely in keeping with its extraordinary heritage.

‘The East Lothian location, just 10 miles from Edinburgh city centre, makes it accessible in spite of its secluded feel, and the views over the Firth of Forth
and surrounding countryside are quite breathtaking.’

If you’re up for putting in an offer, you can do so through Zoopla.

Get in touch by emailing [email protected].

What I Own: Writer Amy’s London flat has doubled in value since she bought it

Cottage where Sir Terry Pratchett lived is up for sale for £760,000

Seven ways to make your bathroom beautiful on a budget

When does the stamp duty holiday end and will it be extended?