A BLOKE accidentally set up a group chat with 60 girls after he tried to send them all a sexy selfie at the same time.

The singleton was messaging a few girls, and rather than individually send them a photo of his physique, he decided to save time and send the snap en masse. 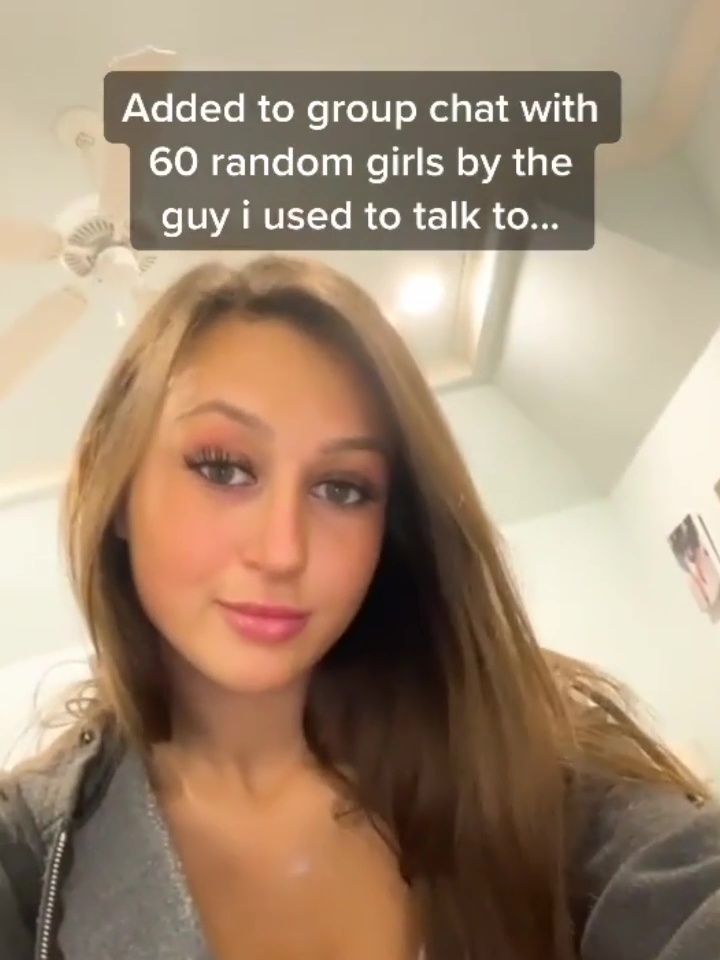 A woman got the shock of her life when she went to open a sexy selfie a bloke sent herCredit: TikTok

But instead the man, called Isaac, ended up creating a group chat of all the 60 girls he’d tried to send a photo of his abs to.

One of the women, called Alaina, shared the hilarious fall-out as they realised he’d been chatting them all up – at the same time.

After being rumbled, Isaac posted an apology to the girls, saying he was ‘humbled’ and was ‘re-evaluating’ his life choices.

But on the plus side, Alaina said the girls had become ‘best friends’ after finding out about each other. 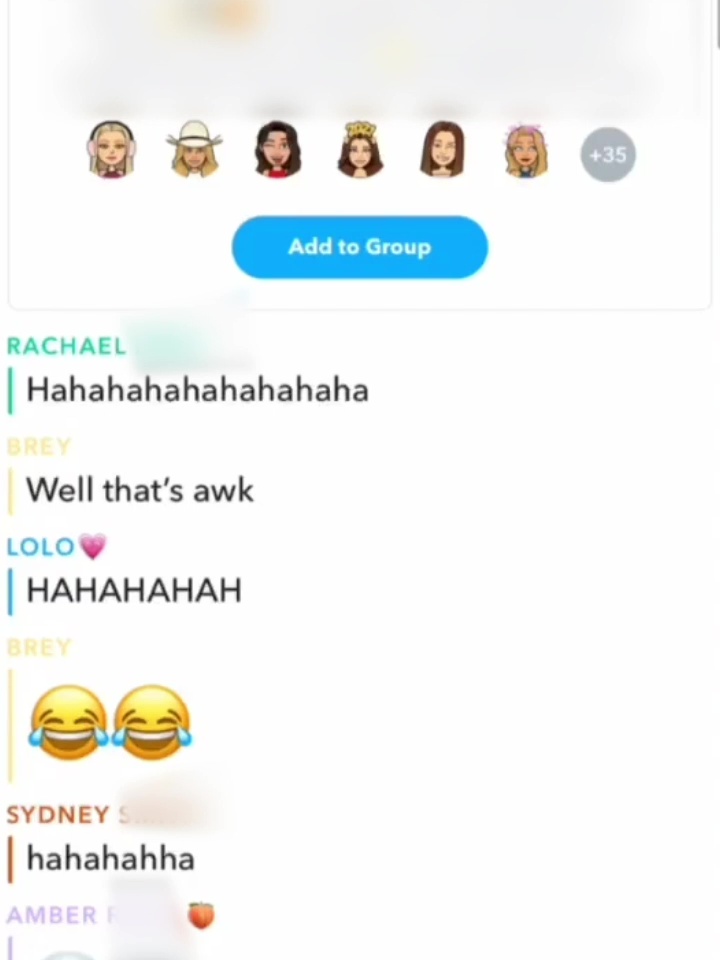 She shared the messages to TikTok, saying: “Added to a group chat with 60 random girls by the guy I used to talk to.”

She said she opened up the photo of Isacc’s abs, only to be met with numerous messages from dozens of other women.

The chat goes wild as some girls try to figure out what’s happened, while they all start sharing stories of Isaac. 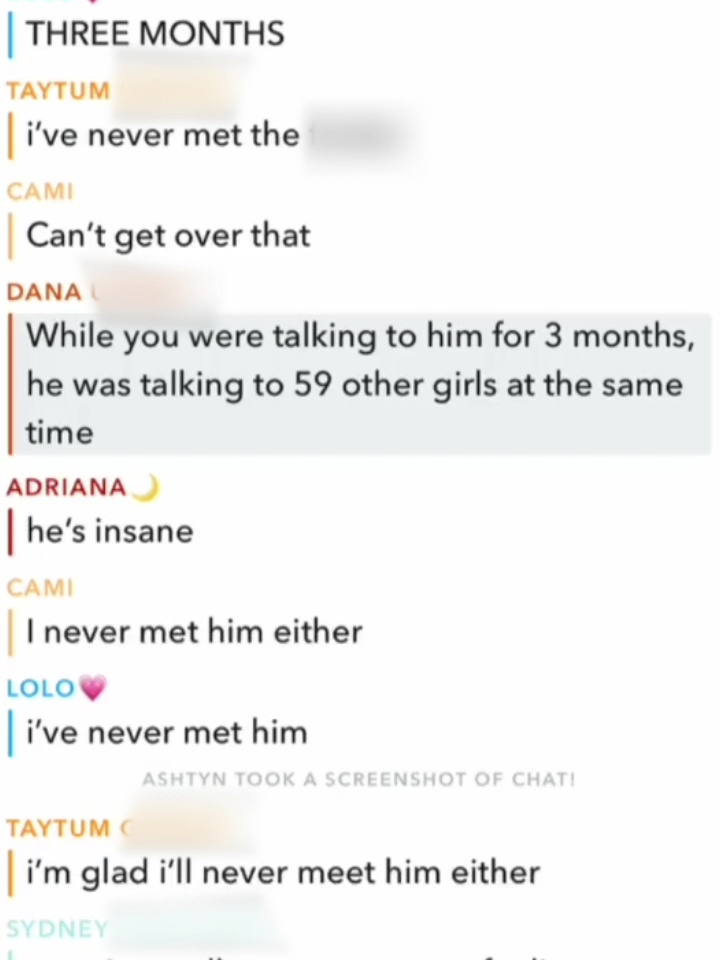 He’d tried to send them all the same sexy snap of his abs but it backfired terriblyCredit: TikTok

Puzzled, another asked: “Can someone explain to me what this is.”

One girl wrote: “Did he do this on purpose.”

Someone else posted in the chat: “I have second hand embarrassment.” 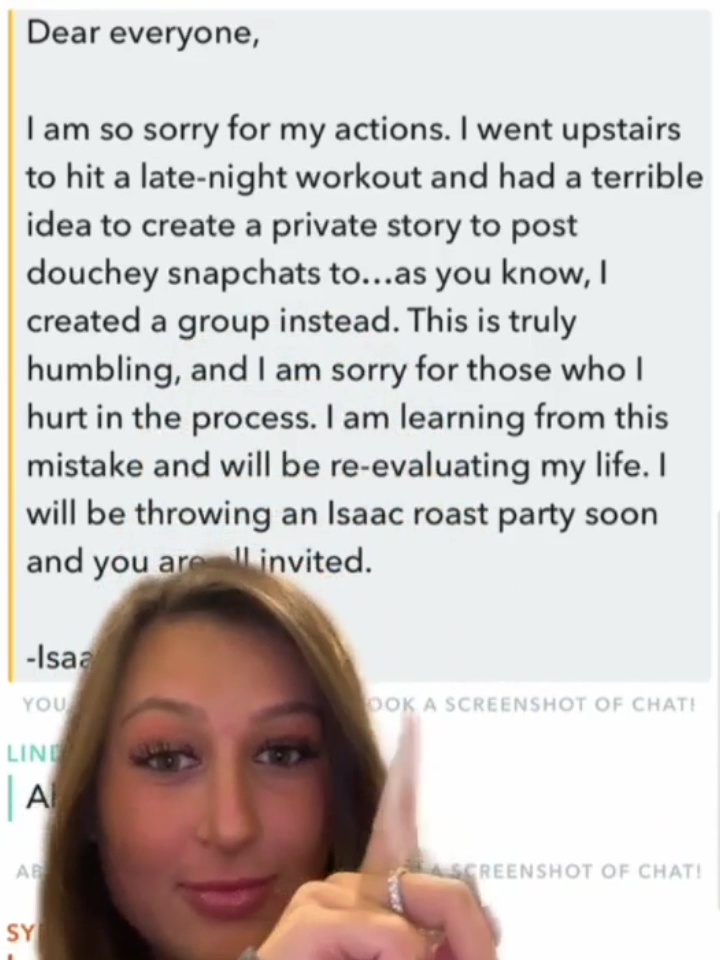 He later shared a grovelling apology and confirmed he was re-evaluating his lifeCredit: TikTok

Another girl reckoned she ‘dodged a bullet’, adding ‘you guys are cooler anyway’.

Isaac himself penned a lengthy apology, starting off with ‘dear everyone’.

He said: ”I am so sorry for my actions. I went upstairs to hit a late-night workout and had a terrible idea to create a private story to post douchey-snapchats to.

“As you know, I created a group instead. 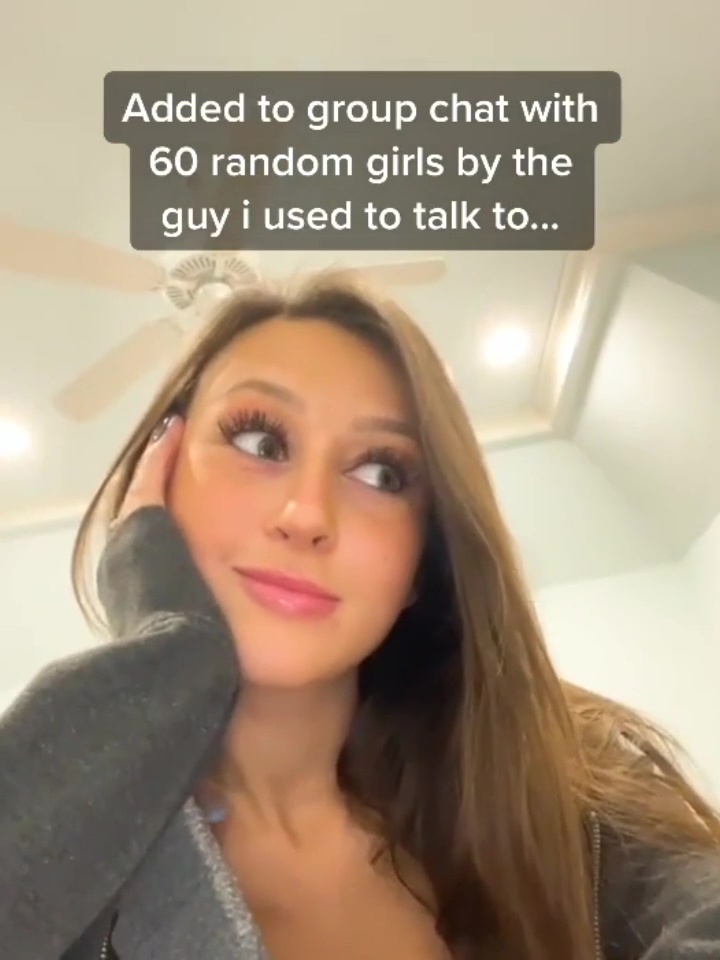 “This is truly humbling, and I am sorry for those who I hurt in the process.

“I am learning from this mistake and will be re-evaluating my life.

“I will be throwing a roast Isaac party soon and you’re all invited.”

The cringeworthy mix-up has racked up more than a million views online, as people were in disbelief over Isaac’s attempted pick-up line.

Commenting on the clip, captioned ‘the story of 60 new best friends’, one person said: “Why would he think this was a good idea.”

More than one million people have watched the cringeworthy clip

Another wrote: “I mean! He acknowledged and apologized and now is re-evaluating! I feel for him now.”

A third commented: “Baha I love it. Instead of hitting 60 people individually he created a group! Bet he’ll think twice before sending the same ab pic to 60 girls.”

This person thought: “OH MY GOD I would delete all social media at that point.”

Another admitted: “I want to join the Isaac roast party.”

Meanwhile this woman revealed her crush cruelly photoshopped a snap of her – to make her slimmer.

And this student told her ‘strict’ parents she got pregnant by sitting on her boyfriend’s lap & him sneezing – and it IS possible.

Plus this woman keeps sex spreadsheet on EVERYONE she’s hooked up with & ‘data analysis’ shows it’s good news if you get to date 4.