Mum struggles to hold her baby after pregnancy made heart fail 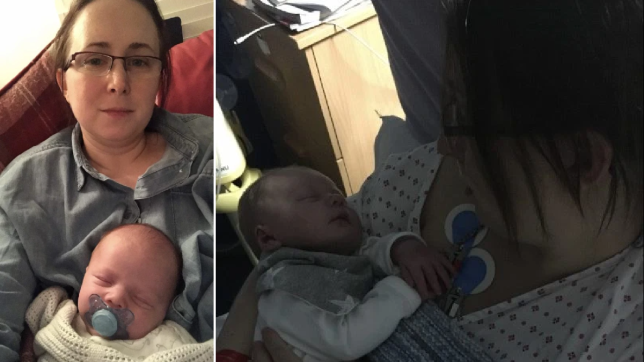 Caroline had to be sat down and resting to be able to hold her baby (Picture: Caroline Neal)

When Caroline Neal went into hospital to give birth to her first child, she expected to be home a few days later.

But the 35-year-old, from Essex, ended up spending weeks in hospital after his birth and came home struggling to walk up stairs, shower herself or even hold her baby while standing up, as the pregnancy caused her heart to fail.

She developed a rare condition called peripartum cardiomyopathy (PPCM), which happens in the last months of pregnancy or the first few months after birth.

PPCM causes the left ventricle chamber of the heart to become enlarged. As the ventricle becomes bigger than normal, the muscular wall becomes stretched and thinner. This makes the muscle weaker which, in turn, means that it doesn’t work as well. 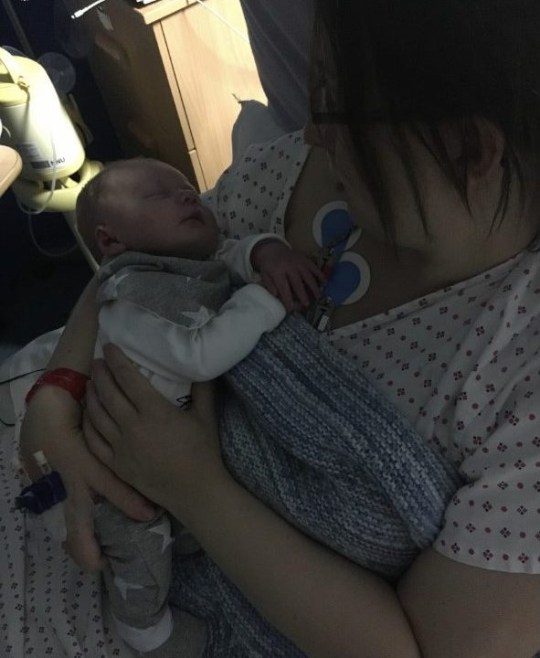 After a fairly normal pregnancy, Caroline, a qualifications development officer for Swim England, went into hospital to be induced on December 31, 2017.

As she had a few long-term but minor problems with her heart, she asked to be checked out towards the end of her pregnancy but doctors didn’t see any issues.

She explains: ‘I knew I had a mild mitral valve regurgitation where the mitral valve in the heart doesn’t close tightly, and first degree heart block, where wiring of the heart is slow to send electrical signals but all of the signals are able to pass successfully.

‘I made sure I asked my cardiologist for an ECG test in the last trimester, due to the amount of stress pregnancy puts on the heart. However, it all came back clear – nothing was seen to be wrong with my heart at that point.’

After a tough and six-day long induced labour, Caroline and husband Dean welcomed Aiden on January 5 2018, but he was taken to neonatal intensive care for treatment after the birth.

Caroline was put back on a maternity ward while she recovered and the first signs that something was wrong were when she walked down to see him every few hours.

She explains: ‘I really wasn’t right in myself. I would get very exhausted just walking that short distance. I would have to prop myself up against the walls. It got to the point where someone had to take me in a wheelchair. 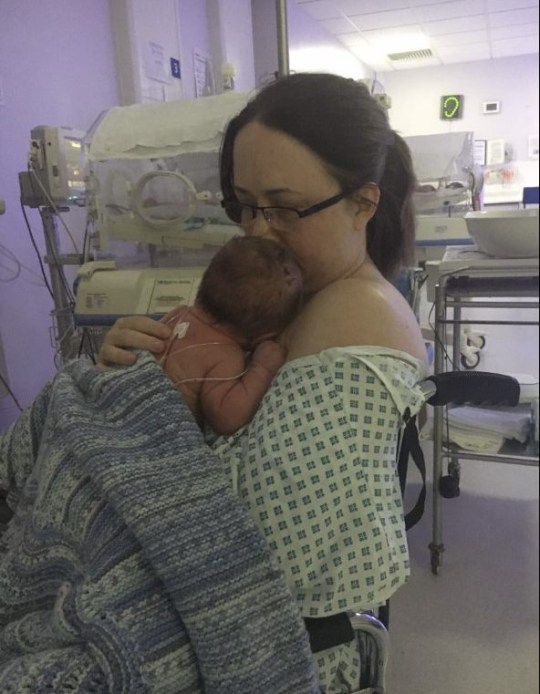 ‘One time I was taken to NICU in a wheelchair and I was holding Aiden and I just felt suddenly very weak, like I was going to drop him.

‘I got back to bed and I started having uncontrollable tremors and my pulse started to drop, but the nurses thought it was just my heart block.’

Caroline felt she was gradually getting worse and was terrified by the symptoms she experienced.

She adds: ‘I would lay my head down to go to sleep and every time I did, I could feel my heart beat slowing. I was so scared it was going to stop while I was sleeping. 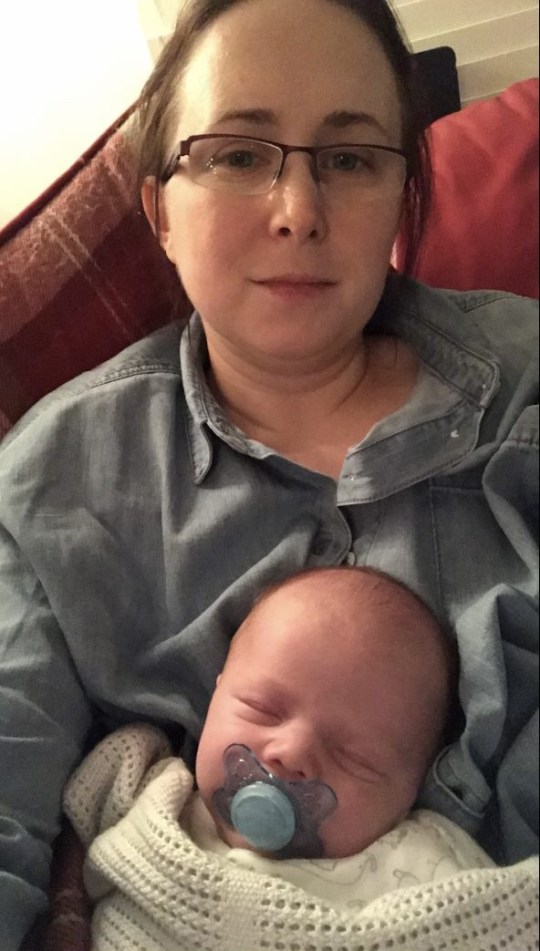 When she got home, she struggled physically because of her condition (Picture: Caroline Neal)

‘I just couldn’t get the rest I needed because of that.’

She was also suffering from constant and severe perspiration due to the water retention in her body.

A few days after giving birth, she was moved to a cardiology ward but it took 10 days before she was diagnosed with PPCM.

She adds: ‘Around the time I was moved to the cardiology ward, Aiden was taken to another hospital because he was bringing up green vomit. We were separated and I think as I was getting worse, they put it down to the stress of being away from my baby and the symptoms down to my pre-existing minor heart block getting worse.’

But further scans and tests showed she had heart failure.

What is PPCM and what are the symptoms?

Peripartum cardiomyopathy is a rare type of heart muscle disease which occurs during the last
part of, or in the first few months after, pregnancy.
• The heart becomes enlarged and weakened, and less able to pump blood than normal.
• Peripartum cardiomyopathy is serious, but around 70% of women recover by 1 year following
diagnosis (based on their ejection fraction, rather than their symptoms).

PPCM usually causes heart failure. This happens because the heart isn’t working as well as it should, and fails to pump enough blood, at the right pressure, to meet the body’s needs.

The symptoms of heart failure include:
• breathlessness, especially when resting or lying down;
• a cough;
• water retention (causing swelling in the ankles and tummy);
• palpitations (a change in the heart rate or rhythm that the person may become aware of, particularly tachycardia – an abnormally fast heart rate);
• extreme fatigue (as oxygen levels are low);
• finding it had to exercise or be active; and
• some women may also have swollen veins in their neck due to blood not being pumped efficiently.

Once they realised was wrong with Caroline, a nurse sat her down and explained what was happening.

She says: ‘I cried hearing the word ‘failure’. You feel that the organ that keeps you alive has let you down, and you immediately think you’re going to die.

‘The nurse explained that most women make a good recovery over time but it was just a really scary thing to hear.’

After her diagnosis, they were able to start treatment to manage the symptoms and help her recover and she was finally able to go home.

But the heart failure had a huge impact on her body. 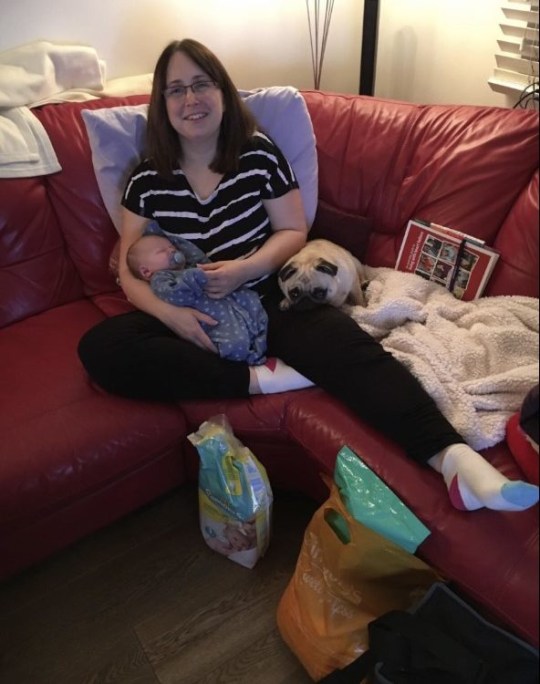 Caroline and Aiden when she was able to go home (Picture: Caroline Neal)

She adds: ‘I was so scared about going home because I was so used to having lots of monitors and I wouldn’t have that outside hospital.

‘I still felt very unwell at home. I struggled to walk up stairs, have a shower by myself and hold Aiden while standing up.

‘Just going to the shops, I had to look for chairs so I could sit down and I struggled with pushing the buggy if there was even a slight incline.

‘I found it so hard to understand how I’d gone from being able to do so many things around the house to not being able to manage a shower, loading the dishwasher and the washing machine all on the same day.’

As time went on, she very slowly got physically better but the whole ordeal took a huge toll on her mental health.

She adds: ‘About 11 months after Aiden was born, I was really struggling and I went to see a psychiatrist, who diagnosed me with delayed postnatal depression.

‘The system doesn’t help though as the support was for the first year after you give birth, and by the time I got that help, it was almost too late.’ 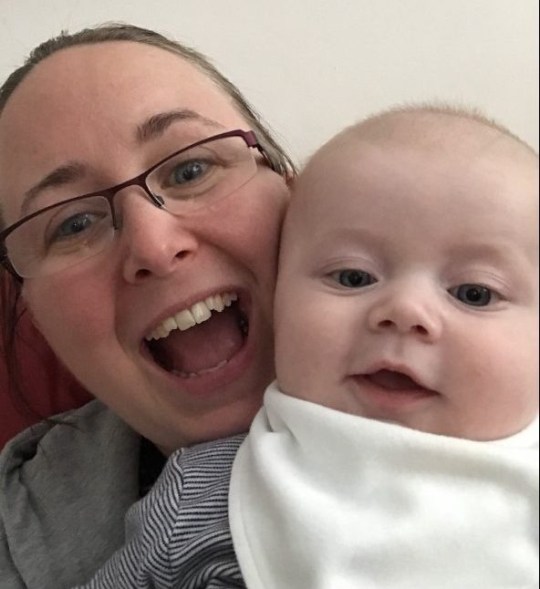 It took months before she started to recover (Picture: Caroline Neal)

Around six months later, she was diagnosed with post-traumatic stress disorder and high-functioning anxiety.

She says: ‘While I continued to feel awful for a year after diagnosis, I eventually built confidence, and became more resilient mentally. I underwent CBT and EMDR therapy that helped me gain perspective to move forward.’

Now three years on from having Aiden, Caroline is much better but says she still does have days where the condition leaves her feeling unwell.

She says: ‘I can now easily go out for an hour and a half long walk with the dog now and I can walk with Aiden on my shoulders, but it does catch me out on the odd occasion.

‘Sometimes when there’s a lot of stress on and I don’t listen to my body, it does impact me. I can sit down on the sofa, and just be out like a light with exhaustion sometimes.’

Caroline is now speaking out as part of the Beating for Two campaign with Cardiomyopathy UK to raise awareness of PPCM.

She says: ‘I’m grateful to the nurses on the Cardiomyopathy UK phone line, who remain positive, and remind me to listen to my body and that it’s ok to rest. 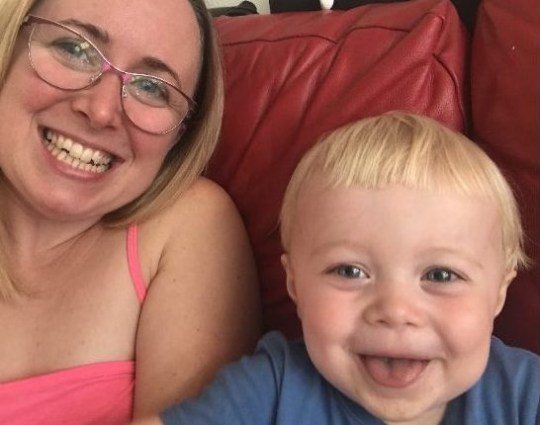 ‘It has just been amazing to have somewhere to turn to and have someone who can listen, understand and give advice.’

Caroline wants to raise awareness of PPCM as it can be easily missed and misdiagnosed. She wants to see brain natriuretic peptide (BNP) blood tests, which measure levels of a protein made by your heart and blood vessels, introduced into routine checks.

She says: ‘Lots of health care professionals are sadly unaware of the condition, but it can have a devastating impact on people’s lives. More BNP blood tests should be put into the pre and post-natal checks to safeguard expectant mothers and their families.

‘Now, My main focus is to be healthy (heart and mind), and to spend as many years as I can watching my son Aiden grow up.’

‘This incredible organ is beating for two, but we don’t always give it the recognition and attention it deserves. While PPCM is thankfully rare, its effects can be devastating if left undetected.

‘However, the condition is completely manageable if caught early and most women who are diagnosed live healthy and fulfilling lives.

‘We know women often put their needs to the bottom of the priorities list, but we urge people to trust their instincts and to watch for signs that their heart might be struggling to cope, during pregnancy and after birth.

‘If you feel that something isn’t right speak to your GP, midwife or health visitor.’

For more advice and information about the signs and symptoms to look for, and what is ‘normal’ and what is not during and after pregnancy, visit Beating for Two.

Get in touch at [email protected].