I had 3 years left to live after ovarian cancer diagnosis

WHEN Anne Ainsworth was diagnosed with advanced ovarian cancer in 2014, she was shocked to discover the low survival statistics.

But the 60-year-old says a drug called niraparib “gave me my life back” – and it will now help thousands more women every year. 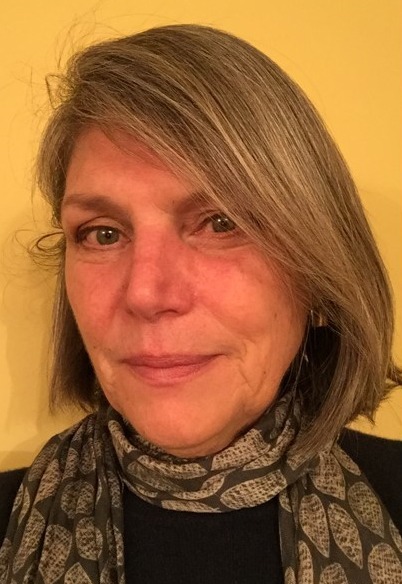 Anne Ainsworth, 60, said a new ovarian cancer drug called niraparib “gave me my life back”. She is pictured recently 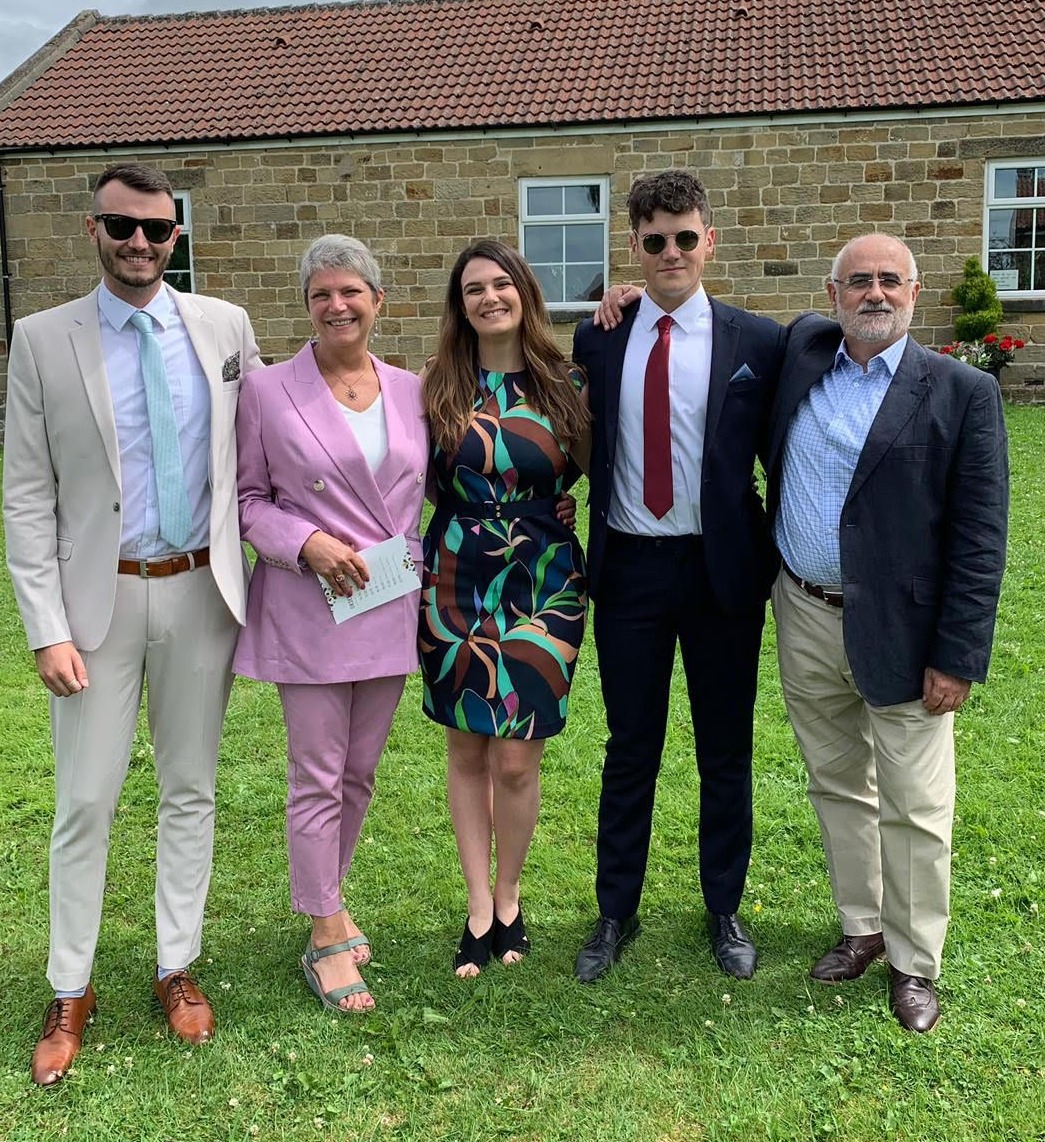 Drugs watchdog Nice says the NHS should offer patients the daily pill that can keep tumours under control for years, it was announced yesterday.

It’s been labelled the biggest breakthrough in ovarian cancer treatment in decades, with around 3,000 more people a year in England likely to benefit.

It will be given to women diagnosed with advanced ovarian cancer to help prevent tumours regrowing after chemotherapy.

Preliminary trial results show it can keep the disease at bay for an average of six months longer than placebo treatments.

And some women are still in remission more than three years later – allowing them to live a near-normal life.

Ovarian cancer is known as the “silent killer” because its diagnosed late in most cases. The symptoms are often mistaken for other less serious conditions.

Anne, a teacher from Wiltshire and mother of three children in their 20s, was diagnosed with advanced ovarian cancer in 2014.

She told The Sun: “I was absolutely stunned to find out I had something seriously wrong with me, and I was looking at potentially only three years left to live. The stats on ovarian cancer are just appalling.”

After treatment, Anne’s cancer returned in 2018.

She was given more chemotherapy before being enrolled on the niraparib trial to keep the disease at bay for longer.

She said: “The fact this has given me an extra two years is great.

“It might not sound great, but for a cancer sufferer, especially with what they call the ‘silent killer’, it’s just amazing.

“I feel great, and confident enough that i can plan my retirement, which is something I am thinking about now. I can look forward to the next couple of years.

“Even if my cancer came back tomorrow, I will have the chemo, then a little time after that.

“I feel very fortunate that I can have it – it’s given me my life back.”

Anne had no symptoms in the lead up to her diagnosis in 2014, other than some bleeding which led to her GP referring for scans.

She said: “It was only a few days after seeing my GP I went from them thinking I had a hormonal imbalance to suddenly having a massive tumour on the scan. 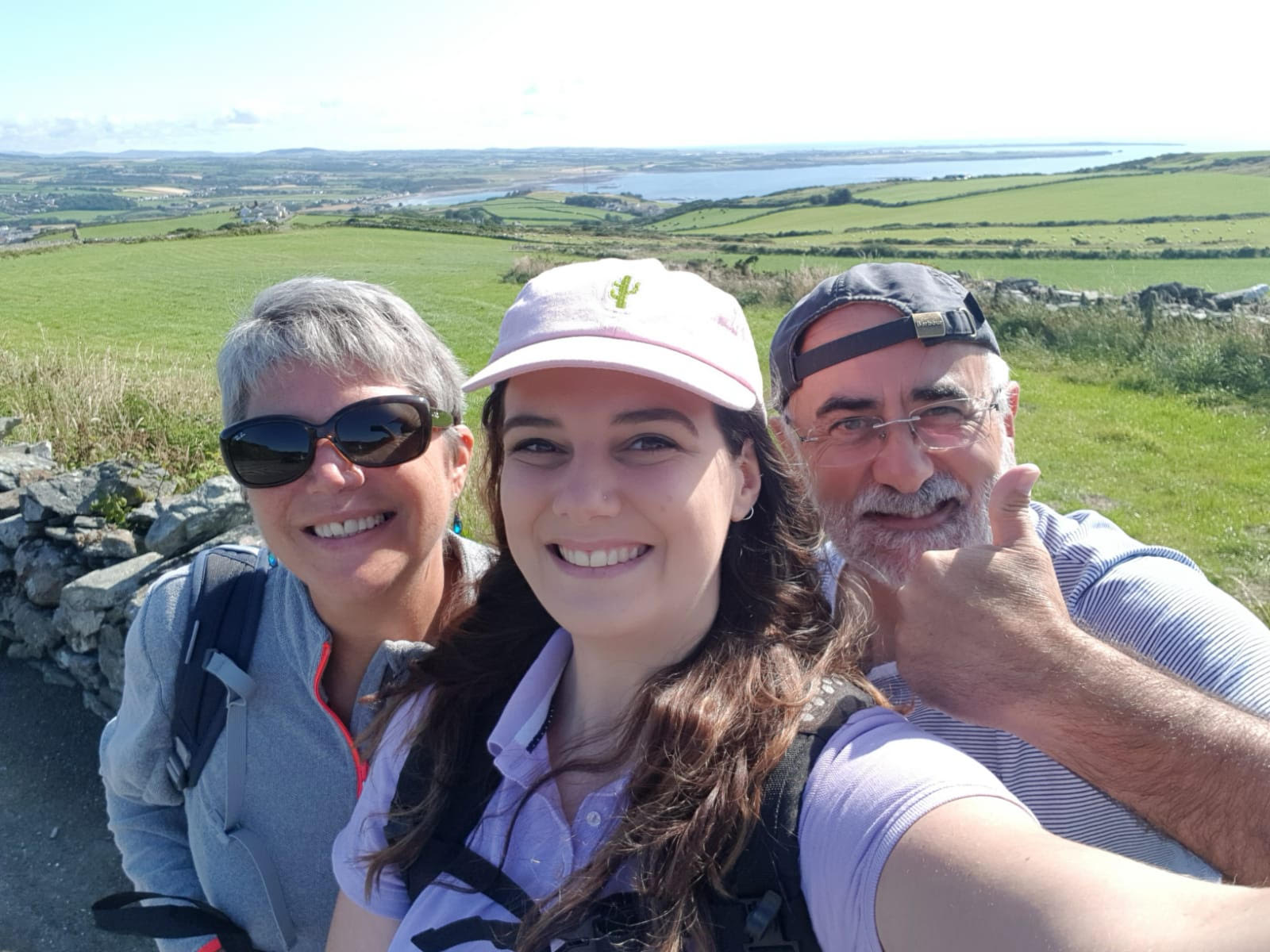 Anne pictured with her daughter Peggy, 28, and husband Bernard, 61, while taking Niraparib

What are the symptoms of ovarian cancer?

Ovarian cancer affects the ovaries, which are a small pair of organs located in the female pelvic cavity.

They are an important part of the female reproductive system as they connect to the womb and store eggs.

If you have ovarian cancer, cells in or around your ovaries start to grow abnormally which can lead to tumours.

Ovarian cancer may affect one or both of your ovaries, and there are several types that can affect women of all ages.

Things to look out for include:

“They told me the tumour was it just blocked everything out. They couldn’t make out the ovaries.”

But it wasn’t until after an operation to remove the tumour that Anne and her family, including husband Bernard, 61, found out she had ovarian cancer.

Anne said: “They send it of to the lab then don’t give you results until you two weeks later.

“We discovered on Christmas Eve that I had stage 3c cancer, which is quite advanced cancer.

“It was a real shocker. I didn’t have a clue. I just thought I’ve always been so healthy.”

She then went onto a maintenance drug that she had to go to hospital to receive through an IV every 3 months, for 18 months.

But then, in September 2018, blood tests, which led to scans, showed her cancer had returned.

Anne said: “I had chemo again, and at the end of it my consultant said there is this new drug on the block, how do you feel about trying it?

“I read all the research papers i could understand and it seemed like a pretty good deal for me.”

Anne started taking niraparib in December of 2018, and has been on it every since. 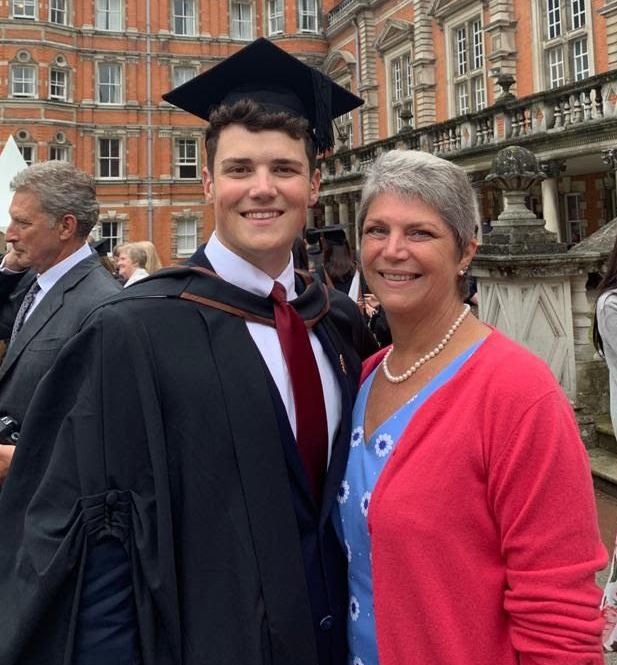 Anne, pictured with her son Harry at his graduation, said: “The fact this has given me an extra two years is great. 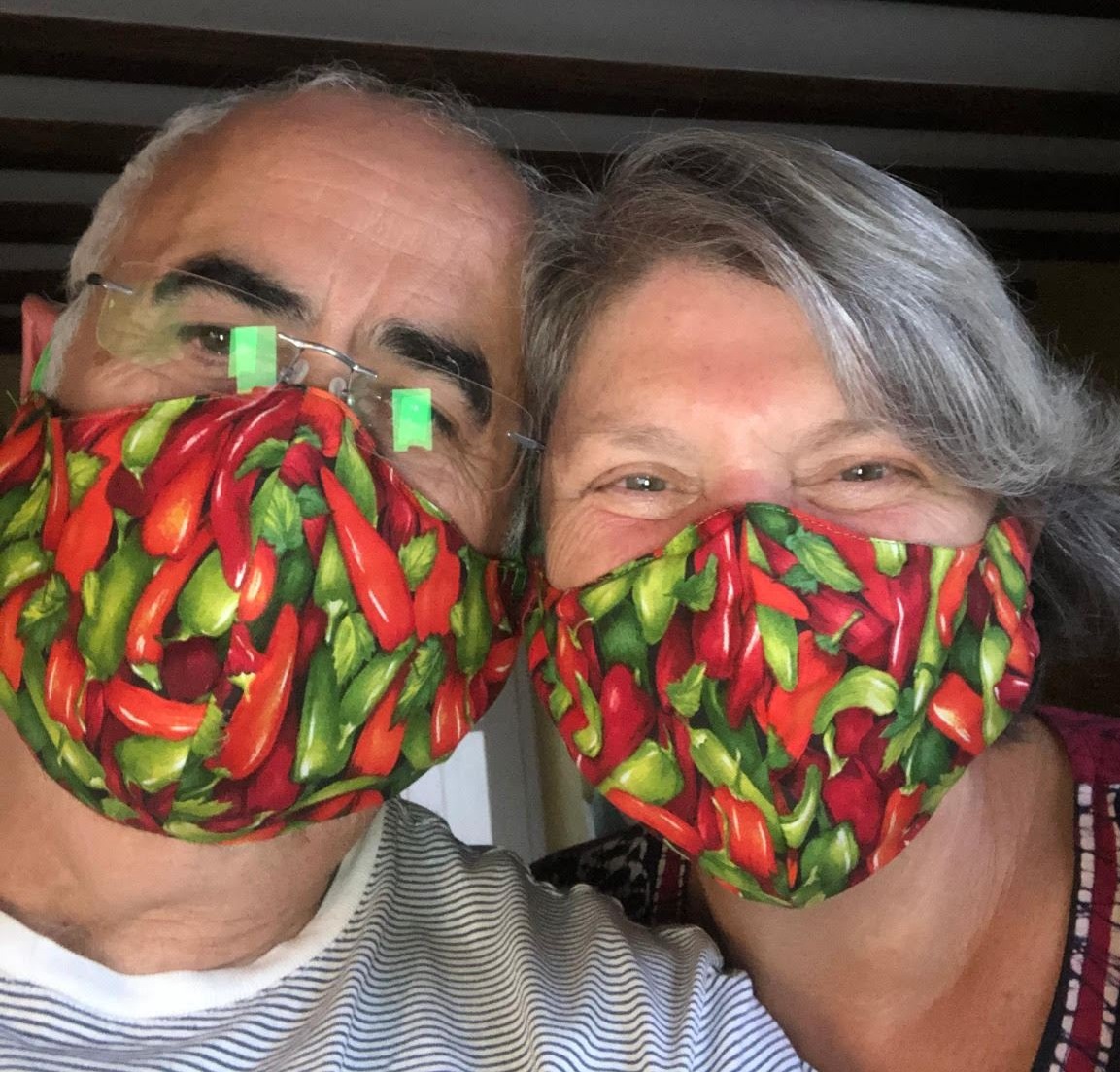 Anne and her husband. She said:  “I feel very fortunate that I can have it – it’s given me my life back.”

She said: “You have the chemo first, so the cancer cells are damaged, and then niraparib prevents them repairing themselves.

“There are so few treatments for ovarian cancer, I just thought I am so lucky to get this.

“I’ve got this disease at the right time for something to come along. I was thrilled there was something new, with a bit of hope attached to it.”

Anne said she feels privileged to have been part of the trial, adding: “I am so happy for those who have been newly diagnosed who have a new hope.

“The fact people can have this as a first line maintenance drug, instead of going into hospital and being on a drip every three weeks to keep it at bay like I did, I just think is wonderful.

“You can have life normal pretty much, which is what I do.”

Niraparib, manufactured by the drug giant GSK, was previously only available to women whose disease had come back.

Annwen Jones, from charity Target Ovarian Cancer, said: “Today’s announcement is a major milestone in the fight against ovarian cancer, bringing hope during a pandemic where we have serious concerns about how many women are being diagnosed late

“It’s the first time thousands of women will benefit from this innovative drug from the very beginning of treatment.

“We haven’t had such a breakthrough drug available to so many since the introduction of chemotherapy drug paclitaxel – Taxol – in the 1990s.”

What are the statistics for ovarian cancer?

Around 7,500 women are diagnosed with ovarian cancer in the UK each year, with 4,100 dying from the disease.

In females in the UK, ovarian cancer is the 6th most common cause of cancer death.

Only 11 per cent of ovarian cancer cases are preventable.

It is predicted that more than 1 in 3 of women diagnosed with ovarian cancer in England survive their disease for ten years or more (2013-2017).

More than 25 per cent of women with stage 3 cancer will survive 5 years or more after they are diagnosed.

This goes down to 15 per cent in women with stage 4.

Speaking this week Prof Jonathan Ledermann, from University College London, said: “Today’s decision marks a turning point in advanced ovarian cancer treatment, allowing clinicians to use a key therapy at an earlier phase of treatment and in many more women than ever before.

“This could significantly increase the likelihood that we can delay a woman’s cancer from progressing – for months, perhaps even years longer than is currently possible.

“Maintenance therapy has already changed how we treat ovarian cancer and the decision to recommend niraparib is yet another important step forward on this journey.”

Around 7,500 women are diagnosed with ovarian cancer in the UK each year, with 4,100 dying from the disease.

Two thirds of patients are diagnosed late – when the tumour has already spread and may be incurable.

Victoria Clare, from charity Ovacome, said: “Today’s news will bring deep relief to a great many women with advanced ovarian cancer, offering them the reassurance that they will be able to access the therapy that they need on the NHS.

“It is vital that women are given every opportunity to live as full a life as possible, for as long as possible.

“This is what today’s decision offers and why it is so important to so many women.”

The decision made by Nice in England will also be replicated in Wales and Northern Ireland.

A decision is expected in Scotland later this year.

Marc Clausse, from drugs firm GSK, said: “Maintenance therapy has become a mainstay of treatment in advanced ovarian cancer and making sure it is available as early as possible is key to keeping this debilitating cancer at bay for as long as possible.

“At GSK, we are extremely proud to be part of this historic milestone which takes us one step closer to reaching our goal to maximise survival and quality of life for people in the UK living with cancer.”