Eichmann is one of the most evil men history after he was one of the architects of the Nazis‘ vile “Final Solution” – the mass genocide of six million Jews. 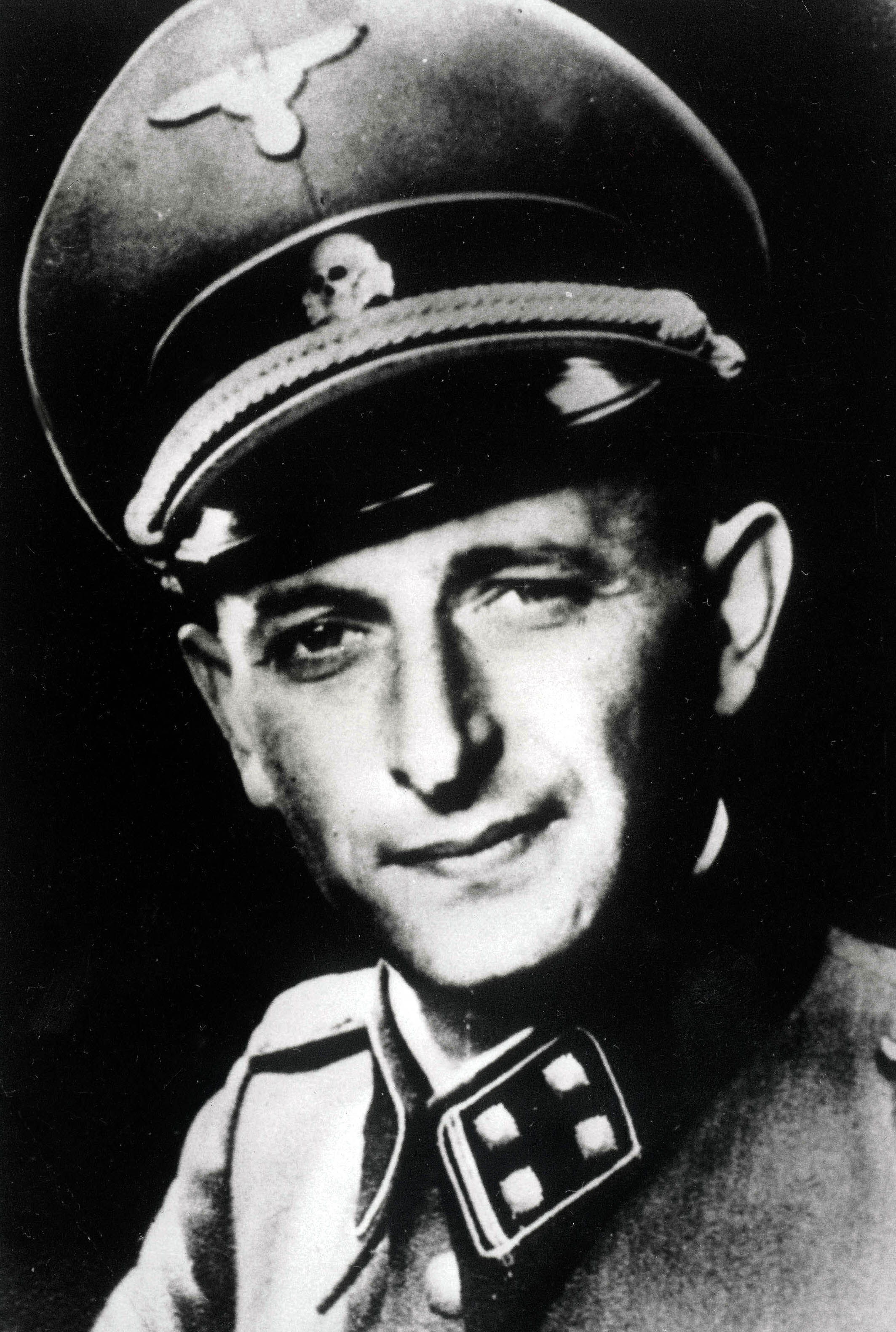 Adolf Eichmann was one of the masterminds of the HolocaustCredit: Getty – Contributor 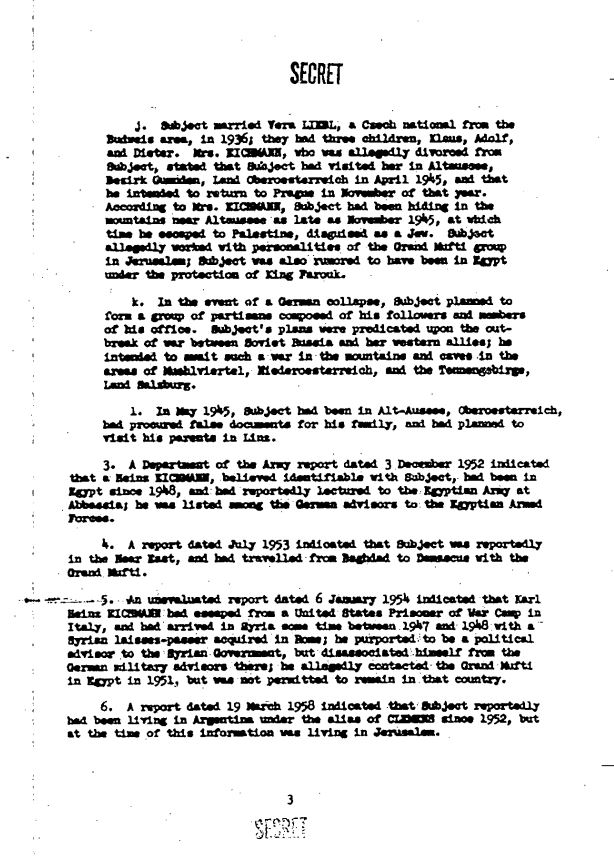 Declassified files held in the CIA archives claim the SS commander was hatching a sinister plot even as the allies bore down on the collapsing Third Reich.

The documents unearthed by The Sun Online show it was believed that Holocaust mastermind Eichmann hoped to try and form a cell of fighters who would go into hiding at the end of World War 2.

Files marked “SECRET” claim that the US Department of the Army understood the Nazi war criminal foresaw an imminent war between the West and the Soviet Union.

Both sides were bearing down on Germany at the time, and of course what followed the fall of Adolf Hitler‘s regime was decades of tensions in the Cold War.

It appears Eichmann dreamed of being able to exploit this imagined chaos as he went on the run along with a host of other Nazis – hoping to set up an army of “partisans” in the mountains of Austria.

This is a stark contrast from his testimony at his war crimes trial that he was “just following orders” as he tried to distance himself from the Nazis after he was caught 15 years later in Argentina.

The secret file is dated 21 June, 1960, which is just two months after Eichmann’s eventual capture.

Details about Eichmann’s plan are cited in the file are from a report dated March 5, 1947, and compiled the US Army’s Counterintelligence Corps in Salzburg, Germany.

It claims: “In the event of German collapse, Subject (Eichmann) planned to form a group of partisans composed of his followers and members of his office.

“Subject’s plans were predicated upon the outbreak of war between Soviet Russia and her western allies; he intended to await such a war in the mountains and caves in the areas of Muehlviertel, Niederosterreich and the Tennengebirge.”

It then states in May, 1945, Eichmann obtained “false documents” for his family and had planned to visit his parents in Linz, Austria.

The file goes onto detail further US efforts to track him down – which make numerous erroneous claims about his whereabouts. 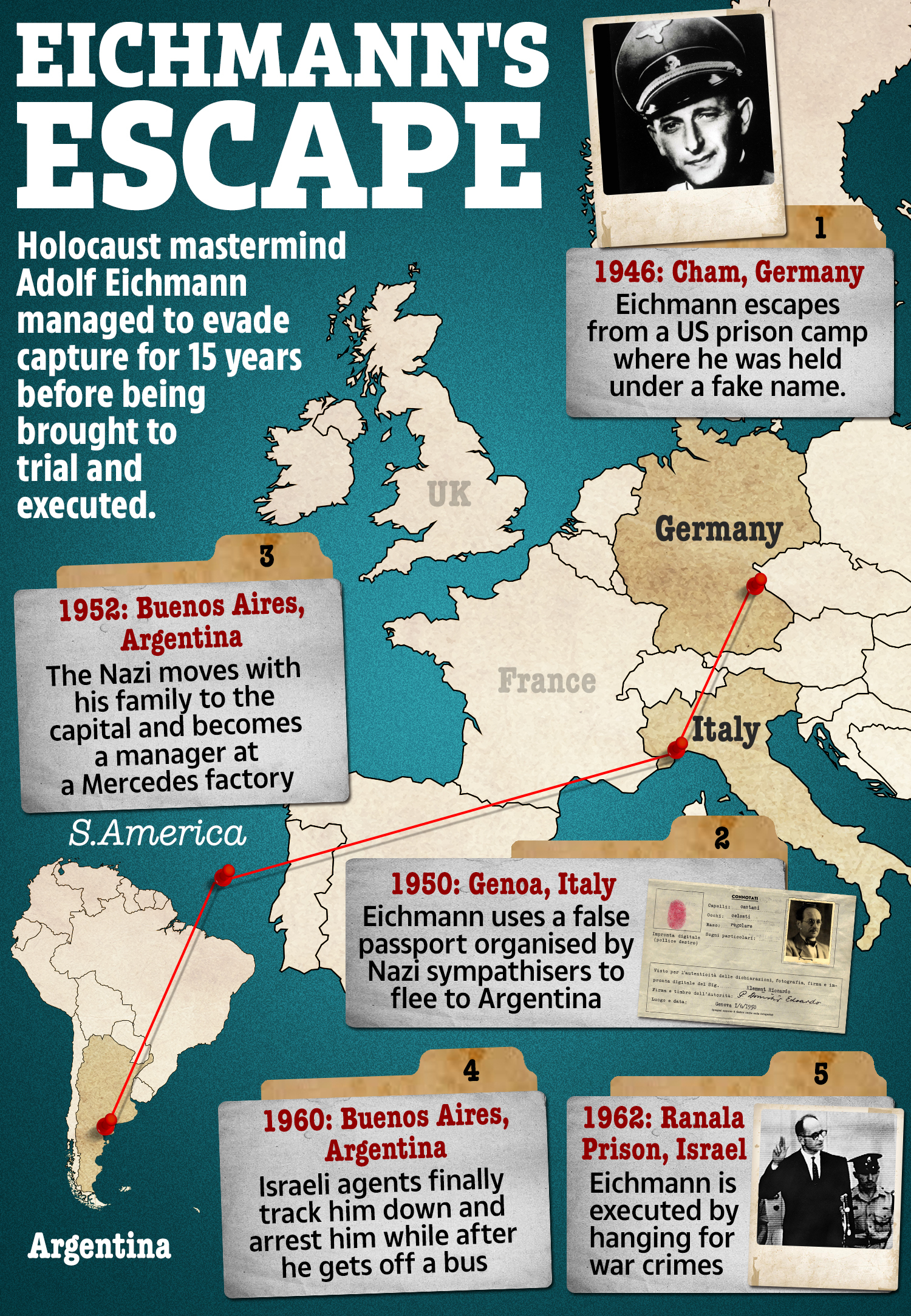 NAZIS WHO ESCAPED TO SOUTH AMERICA

HISTORIANS know that Hitler died in his bunker after shooting himself – but some Nazis did escape to South America.

Known as the “Angel of Death”, Mengele was an SS officer who experimented on and tortured prisoners at Auschwitz.

The vile beast fled to Paraguay, then Brazil, and managed to elude justice before drowning after suffering a stroke while swimming in 1979.

The SS colonel behind mobile gas chambers which killed at least 100,000 people during World War 2.

He managed to escape a prison camp before fleeing to Chile, where he lived out his days until 1984 under the protection of dictator Augusto Pinochet.

He was known as “The White Death” for his white uniform and worked to kill thoses with mental and physical disabilities.

Headed up a program to help “purify” the Aryan race which oversaw the slaughter of 200,000 people with incurable conditions.

He hid out in Argentina after fleeing there in 1949 but was arrested after he returned to Germany in 1963. He fled to Argentina again while on bail, but then became the first Nazi extradited by Buenos Aires – dying in 1981.

Schwammberger would wield a whip, had a German shepherd dog trained to attack people and would throw prisoners in bonfires as he managed three forced labour camps in Poland.

The SS commandant managed to escape to Italy in 1948 before fleeing to Argentina where he lived under his own name. He was arrested in 1987 and was sentenced to life in prison – where he died in 2004.

Responsible for slaughtering 335 people in Rome and signing off the transport of 2,000 Jews to Auschwitz.

He escaped from a British camp on New Year’s Even 1946 while the guards were drunk and then fled to Argentina. Priebke was then exposed by journalists in 1994 before being extradited to Italy where he died in prison in 2013.

Eichmann’s apparent scheme however never came to pass and he was captured by US forces – hiding using forged SS papers that identified him as “Otto Eckman”.

He then fled as he managed to escape a work detail at the prison camp in Cham, Germany.

The Nazi then hid out in Austria before managing to escape to Argentina using the secret Nazi network dubbed the “ratlines”.

He managed to stay undetected there for ten years before being captured by Israeli agents in Buenos Aires.

The file claims spooks settled that Eichmann had been living in Argentina since 1952 under the name “Clemens” but then wrongly thought as of 1958 was living Jerusalem.

Someone named “Mr Radford” requested the information – which came as the US was stunned when Israeli intelligence agency Mossad announced they had caught Eichmann. 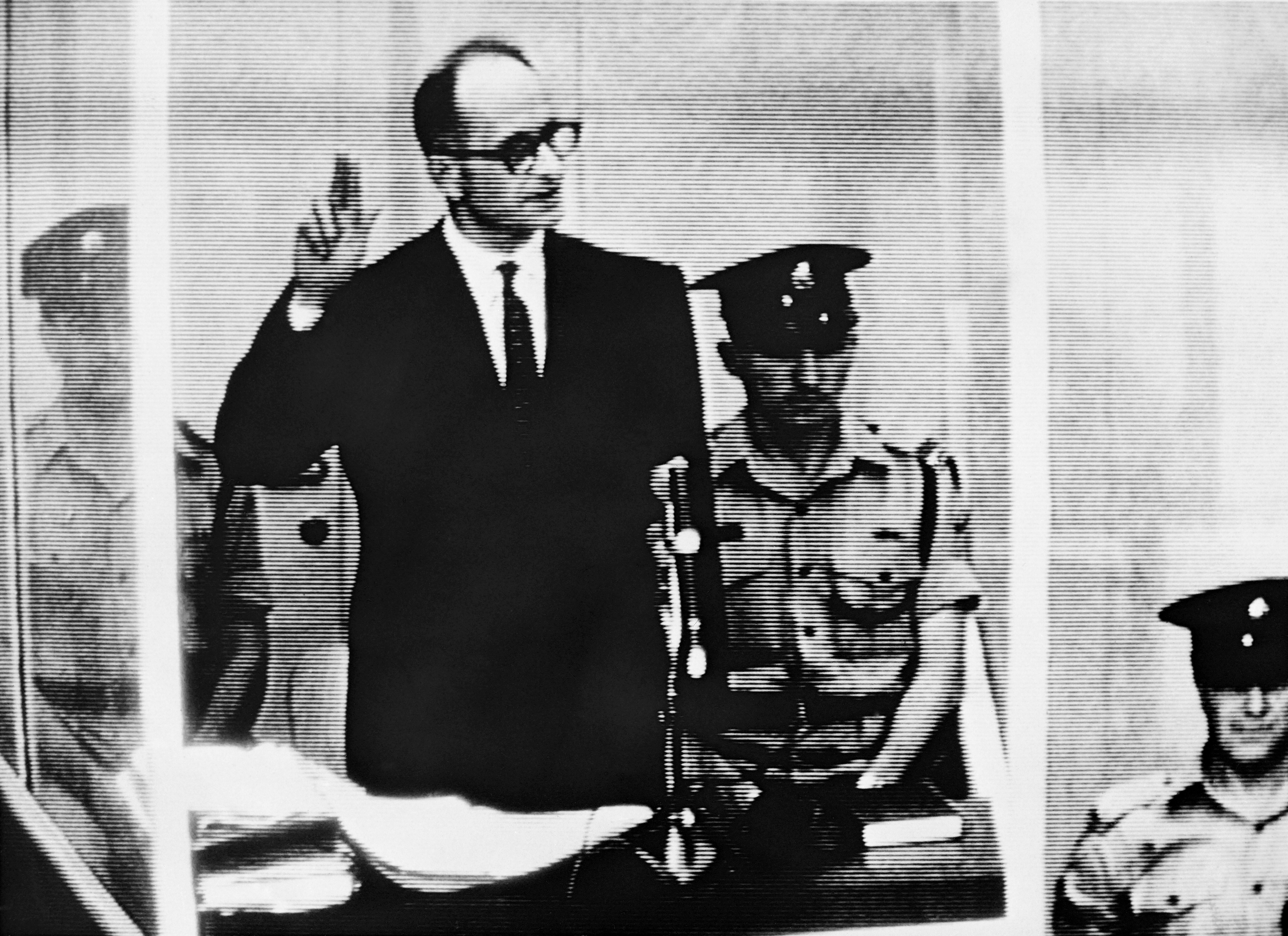 Adolf Eichmann stood trial for his vile actions as the world watchedCredit: AFP 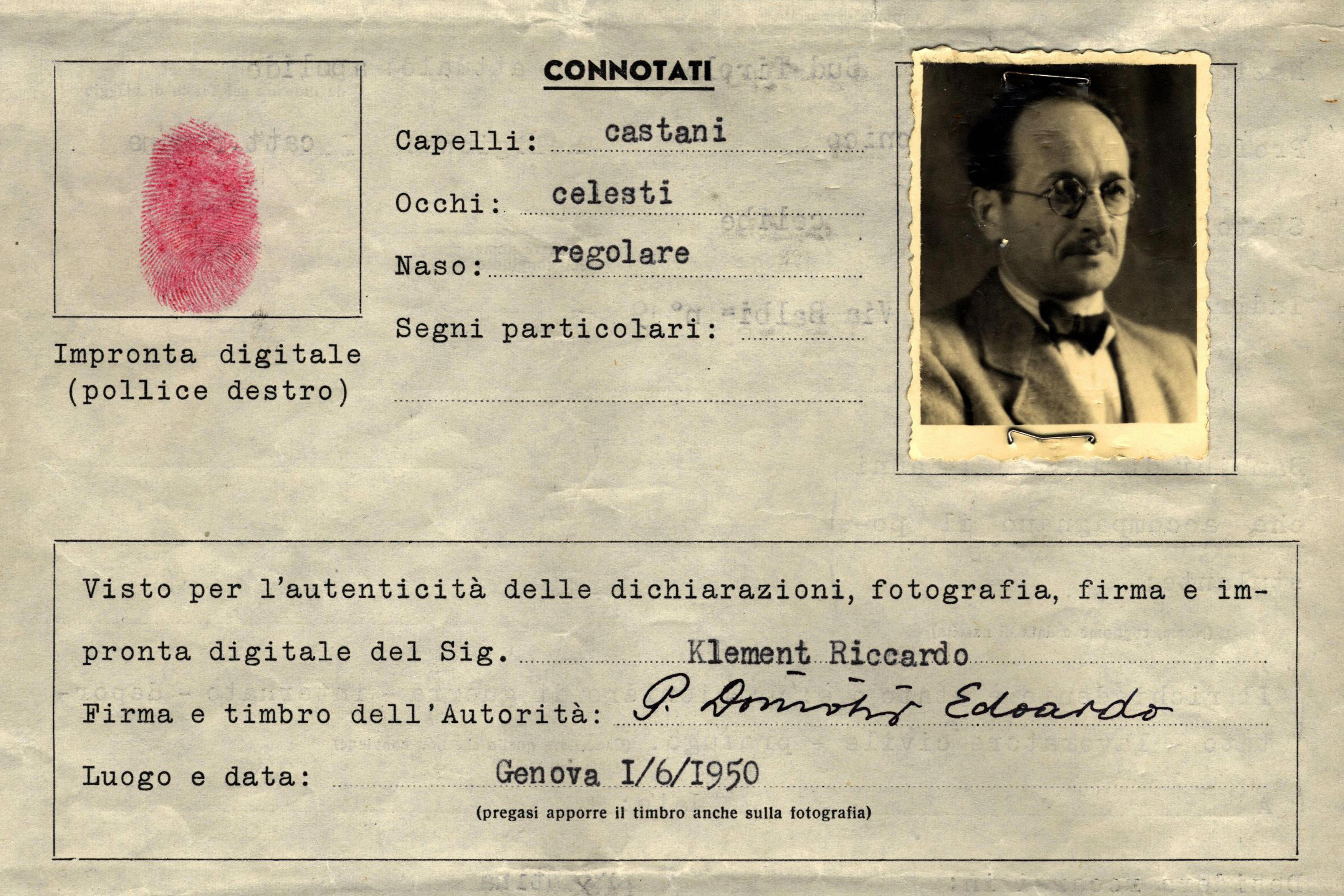 The file reveals various false leads the US pursued – such as claims Eichmann escaped to the Middle East while “disguised as a Jew” in November 1945.

He is also claimed to have for a time been living in Egypt under the protection of King Farouk.

Other reports state he was listed as an advisor to the Egyptian Armed Forces and had travelled to Syria.

In reality, Eichmann escaped from a US detention camp in 1946 and managed to obtain fake papers using the name Otto Heninger.

He lived under the radar in northern Germany for the next few years posing as a workman as his former comrades gave damning evidence about his crimes to the Nuremberg Trials. 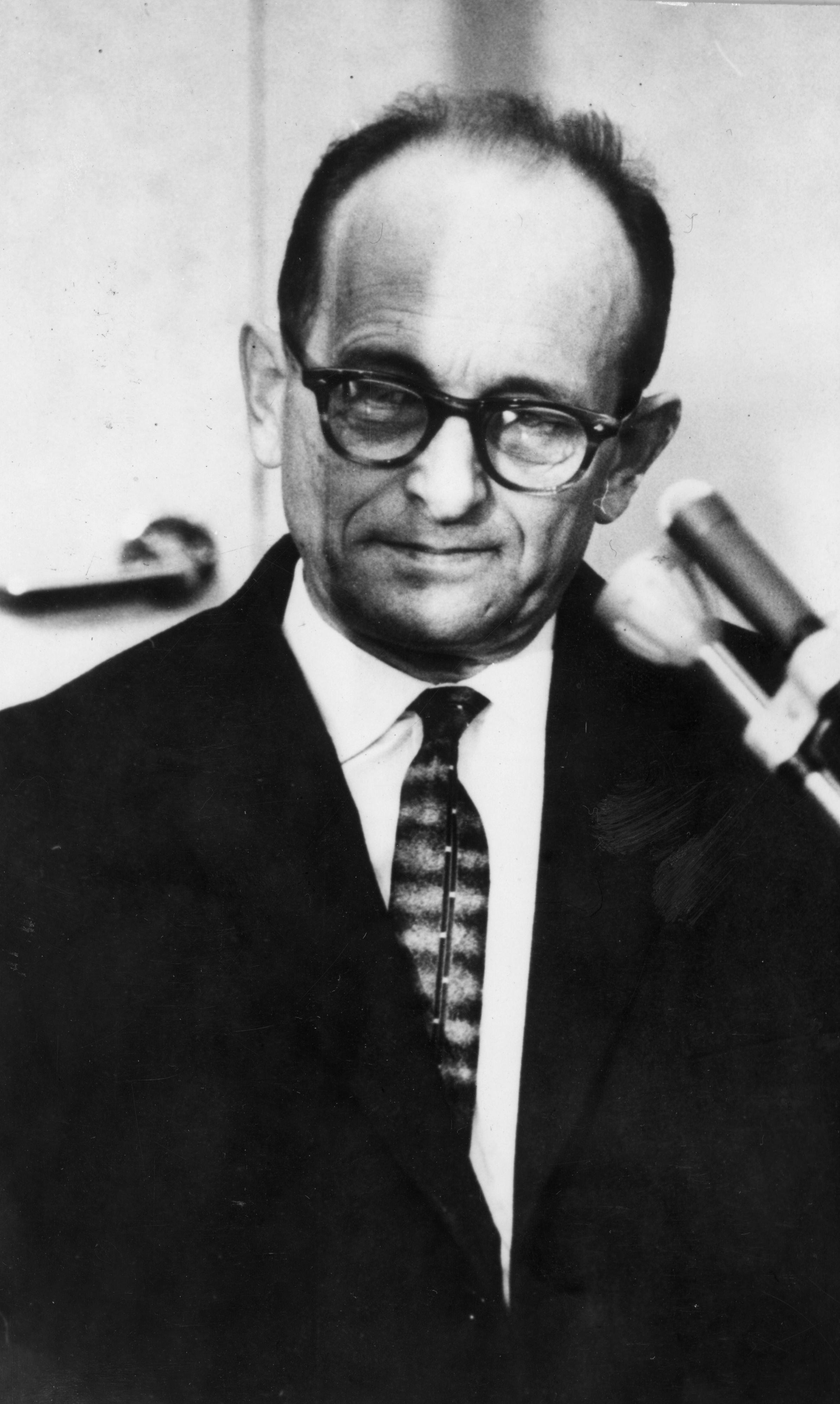 The Nazi then managed to obtain a fake work permit to move to Argentina under the name Ricard Klement, organised by Nazis sympathiser Bishop Alois Hudal.

Hiding out at monasteries across Europe, Eichmann managed to get to Genoa in Italy – from where he then sailed to Argentina.

Him and his family moved to Buneos Aries where he became a manager at a Mercedes factory, and gave interviews about his life to a sympathetic journalist.

Mossad agents however had suspected he was in Argentina since 1953, and finally managed to confirm their fears in 1960.

Eichmann was then picked up by a team of agents when he was riding the bus before being smuggled out of Argentina on an El Al flight.

The Nazi was placed on trial before being hanged as a war criminal – being handed Israel’s only ever use of the death sentence.

AROUND six million Jews were brutally slaughtered during World War II as well as millions of other ethnic minorities including gypsies and the disabled.

The world – including the UK – remembers them today on Holocaust Memorial Day, 75 years since the liberation of Auschwitz-Birkenau.

Holocaust Memorial Day is held every year on January 27.

This date, in 1945, marks the liberation of German Nazi concentration camp Auschwitz, by the Soviets, nearly eight months before the war officially ended.

By the time the Soviets arrived, most of the camp’s prisoners had already been sent out on a death march.

Around 7,000 prisoners were still alive when the concentration camp was liberated.

Hitler’s genocide, known as Shoah in Hebrew, wiped out two-thirds of Europe’s Jewish population – including an estimated 1.5m children.

These horrific killings, which took place between 1941 and 1945, shook the world.

In the five years it was open, roughly 1.1million people were killed at Auschwitz.

Around 90 per cent of them were Jewish, while the other victims were generally Romany, Polish and Soviet people.

One in six of the Jews killed during the war died at Auschwitz, in what the Nazis called Hitler’s Final Solution.

Since 1996, January 27 has officially been remembered in Germany as the Anniversary for the Victims of National Socialism, with Italy and Poland later adopting similar memorial days.

In 2005, the United Nations (UN) voted  to officially commemorate the Holocaust.

Eichmann always claimed he was only following orders during the Holocaust and begged with Israel not to execute him.

The Nazi even wrote a letter to the Israeli president as he decried the actions at the death camps as “unspeakable horrors”.

Eichmann’s last-minute plea for mercy was rejected, however, and he was hanged
in Ramle prison on May 31, 1962.

He is one of the most high profile Nazis to initially evade capture, but his arrest and trial is considered a small measure of justice to the victims of the Holocaust.

Eichmann helped manage the mass deportation of Jews to death camps and ghettos – being responsible for millions of deaths.

“I will leap into my grave laughing because the feeling that I have five million human beings on my conscience is for me a source of extraordinary satisfaction,” Eichmann is claimed to have said in the final days of World War 2.

The Sun Online previously revealed stunning declassified documents which show how the UK and US hunted for Hitler for 10 years after the end of World War 2 as they feared he was still alive.