Still smitten! Miranda Lambert and husband Brendan McLoughlin couldn’t be more in love as they celebrated their second wedding anniversary on Tuesday, January 26.

“2 years hitched!! ❤️,” the Grammy winner, 37, gushed via Instagram alongside a romantic snap of her resting her hands on the former NYPD officer’s chest. McLoughlin, 30, replied with a winking emoji and a big red heart before sharing a tribute of his own.

“Happy anniversary to this amazing woman. @mirandalambert ?,” he captioned a playful pic of his wife cooking up a storm in their kitchen. Lambert had her hair tied back and wore an apron that read, “Grab your balls. It’s canning season.”

The “Bluebird” singer and McLoughlin exchanged vows in Tennessee in January 2019 after less than three months of dating. Lambert broke the news of her nuptials on social media one month later. “In honor of Valentine’s day I wanted to share some news. I met the love of my life. And we got hitched!” she announced in an Instagram post at the time. “My heart is full. Thank you Brendan McLoughlin for loving me for … Me.”

Before marking their marriage milestone, the “Only Prettier” songstress opened up about the challenges she and her husband were facing as they quarantined together on her Tennessee farm amid the coronavirus pandemic.

“If newlyweds can survive a pandemic then I think we’re good, you know?” she joked during an interview on New York’s Country 94.7 in July 2020. “It’s a good test. The first month I had a lot of fun. Well, not fun but I was like, ‘OK, we’re off. We’ll probably be back on the road in a couple of months.’ … There’s stuff to do, it’s just the adjusting of not knowing when I’m going to work again. It’s uneasy.” 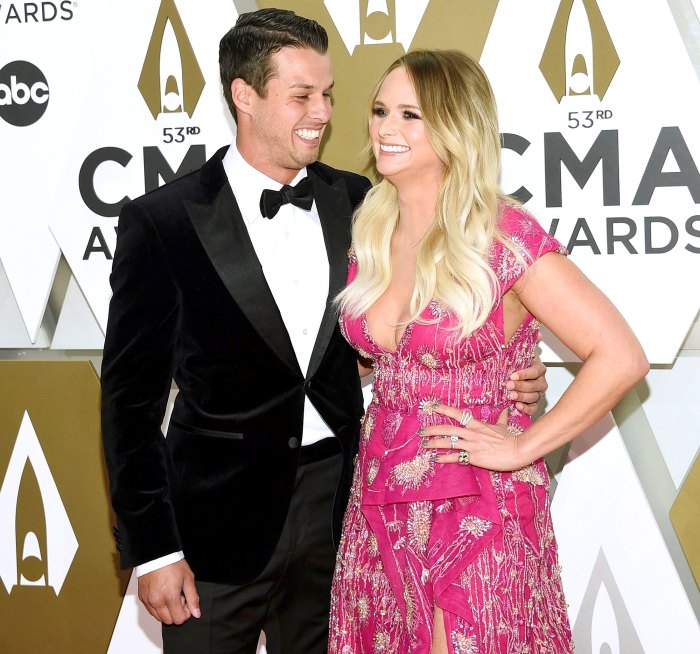 Lambert was previously married to Blake Shelton for four years from May 2011 to July 2015. Shortly after news of Lambert’s surprise wedding made headlines, a source told Us Weekly that Shelton, 44, “found [out] about the wedding at the same time as everyone else did.” The Voice coach, for his part, has since moved on with fiancée Gwen Stefani.

As she continues to plan for her future with McLoughlin, Lambert has babies on the brain. A source told Us exclusively in March 2020 that the Texas native “wants to start a family” with the retired first responder, who welcomed son Landon with ex Kaihla Rettinger in November 2018.

“Miranda has been telling friends that she wants a baby and to be with Brendan forever,” the source added. “Brendan wants to expand their family. … They get along so well together. They’re always focused on each other and cuddling or kissing.”